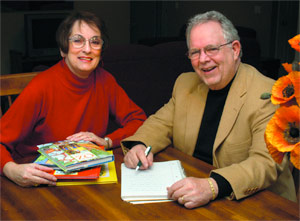 In 1900 – now over 100 years ago – a man named L. Frank Baum first published his first OZ adventure – The Wizard of Oz. It was an instant success and heralded as the first truly American fairy tale. It was made into a silent movie in 1902 and then into the ever-popular MGM classic in 1939, not only with sound but with COLOR!

L. Frank Baum published thirteen other OZ adventure books before his death in 1919 (actually, the last of his books was published posthumously in 1920). Various other authors have continued the OZ stories since that time. In our opinion, none have enjoyed the passion and gained the popularity of that enjoyed by his great-grandson, Roger S. Baum.

Roger S. Baum has published more than 15 OZ adventures and his books are enjoyed by millions! He is considered one of the current top ten best-selling authors of children’s books. Some believe that J. K. Rowling’s Harry Potter series may have been influenced by these adventures in OZ. Mr. Baum is constantly sought after for personal appearances and book-signings – and he honors as many of those requests as he can, while still producing more wonderful stories.

Toto Too, Inc., and Mr. Baum now wish to make his books available to the new cyber-generation through the internet. He will autograph each book himself and your book will be shipped to you for your enjoyment – and that of your children, grandchildren and more. These books have been lovingly bound,  published and made from the finest quality materials – intended to last for generations!