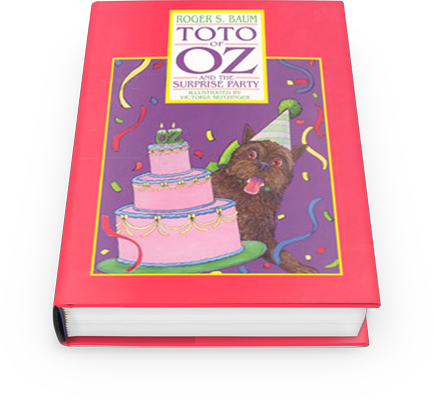 Toto is on his very own adventure. The story needs to be told with pictures, because Toto, as you know, does not talk, except on rare occasions. I hope you enjoy his adventure.

Dorothy was visiting the Emerald City with her dog, Toto. While there, she received an invitation from Glinda the Good Which; Glinda wanted Dorothy to attend a surprise party at her palace in the south of Oz.

Glinda really wanted Dorothy to be at the party, with the Lion, Scarecrow, Tin Woodman, and others, to celebrate the amazing fact that Oz was well over 100 years old! The Wizard was going to be the guest of honor.

Time was short, so Glinda sent the speedy Sawhorse to Emerald City to give Dorothy a ride.

Unfortunately, Dorothy had to leave Toto behind. The Sawhorse had just enough room for Dorothy and the gifts she was taking. Dorothy decided that Toto would be safe inside the Emerald City. There would be friends and plenty of 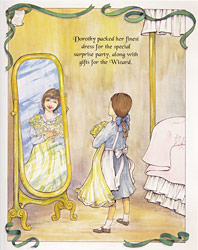 food and water for him while she visited Glinda.

Purchase the Toto of Oz and the Surprise Party for $13.95 – WITH A PERSONAL MESSAGE BY THE AUTHOR
Shipping and Handling not included
Please allow 10 – 15 business days for delivery