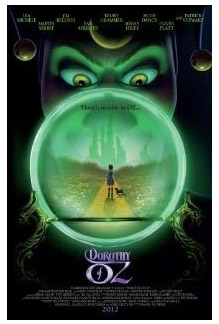 Dorothy of Oz is an animated feature film currently in production period. The film draws inspiration from the classic story “The Wonderful Wizard of Oz” by L. Frank Baum, and the Oz adventure book series written by his great-grandson, Roger Stanton Baum.

Produced with state-of-the-art computer graphics and the latest 3D stereoscopic techniques for animation, “Dorothy of Oz” is the latest chapter in the Oz legacy and will be entertaining to a whole new generation of fans! In “Dorothy of Oz” Dorothy returns to Kansas to find it devastated by the tornado that had whisked her away to Oz.

The home she has been so desperate to return to is severely damaged, and the townspeople are packing up and moving out. But shortly after arriving in Kansas, Dorothy is magically transported back to Oz. She finds out that Oz is in trouble, and the people there need her help. Dorothy’s old friends – the Scarecrow, Tin Man and the formerly Cowardly Lion – have disappeared and Oz is in a state of decay. As Dorothy journeys to find her friends, she encounters a number of new companions and the problems including a man made of marshmallows who can’t think for himself; a china doll princess whose bossiness is a cover for her fragility; and a tugboat with as many personalities as he has pieces. Dorothy must help this odd group band together against a new villan – a wicked Jester who thinks all of Oz should be under his control. You’ve waited more than 100 years to find out what happens the very next day, so check back often as more of the new “Dorothy of Oz” adventure is revealed!